What do the player profile icons mean?

DriveHUD offers several default player type icon profiles that will display as you gain information on your opponents and build history with them. You can view, add, and edit the existing profiles by clicking on the player type icon at the bottom right hand corner of the HUD tab right by the selected stats section. 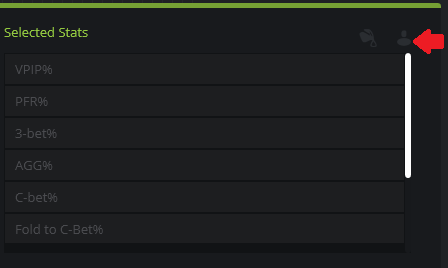 NIT – This kind of player plays tight pre-flop, doesn’t 3-bet too much, and generally only plays very strong hands. They can play aggressive post flop, or sometimes passive. But generally if you’re in a pot with them, they will have started with a top tier premium starting hand.

Fish – This is one of the easiest types of players to play against. They will play too many hands pre-flop, play their hands passively post flop, and go too far with mediocre hands they should have folded earlier in the hand.

Standard Reg – This is a decent poker player who is an experienced online poker player. They generally play a solid starting range of hands, but know a bit about when and how to mix up their starting ranges. They play pretty decent and aggressive postflop, and don’t make a ton of mistakes. They will generally play what is considered a TAG (tight-aggressive) style of play.

Tight Reg – This is a similar kind of player to the Standard Regular, but they will generally play a little tighter of a range pre-flop, and they will fold slightly more hands than they should post flop because of their slightly risk averse nature. They play more of an ABC style of play that is right out of the poker book.

Bad LAG – This is generally someone who likes to plays a few more starting hands than they probably should, and plays fairly aggressive post flop. They tend to have a lot of holes in their post flop game though, and make a lot of post flop mistakes. They can sometimes either be too passive in the wrong spots post flop, and too aggressive in others.

Tricky LAG – This is generally the player you want to avoid the most. They play a good amount of starting hands, and know how to balance their ranges pre-flop and post flop. They are thinking players that can generally think one step ahead of most players. They know when they can get better hands to fold, and can maximize the value of their better hands extremely well.

Whale – These are players that are playing way too many hands post flop, and generally just makes tons of post flop mistakes. They will go too far with hands they shouldn’t, and generally have a hard time folding post flop. They don’t bluff very often and if they do it usually won’t be in the right spots.

Nutball – The name kind of says it all. These players are really unpredictable, and generally just love to gamble it up. They will play too many hands pre-flop, and do some really odd unpredictable things post flop. They make tons of pre-flop and post flop mistakes.

You can also create your own player type profiles and use some of the existing icons that are in DriveHUD if you click CREATE NEW at the top of the player profile screen and then click LOAD to select one of the default icons. You can also import your own custom icon for a player profile you’ve created, but it must be 24×24 pixels.